Since 1919, Mossberg has been the leader in introducing important design breakthroughs to the firearm industry – especiallyfor those wanting to own .410 shotguns. Many product features pioneered by Mossberg are now the standards by which all modern firearms are judged. Never content with the status quo, the men and women of the Mossberg Company constantly strive to improve and update the capabilities of all their Mossberg products.
Their design and innovative edge is truly changing the way shooters use shotguns and rifles. And they are particularly proud that their Mossberg pump shotguns are the only shotguns purchased by the United States government that meet or exceed Mil-S-3443 specifications. It is this basis of unquestionable quality that drives Mossberg to bring reliable, well-built shooting systems to you at an affordable price.
My first Mossberg was a 12 Gauge with a full bird barrel and a modified slug barrel. I used that shotgun for ducks, geese, rabbits, coyote, deer, fox, squirrels – everything we can hunt in New England. But it was not until I purchased my Mossberg .410 shotgun that the perfect relationship was had. I now own 3 Mossberg shotguns and all of them are chambered in .410. I still hunt all the same critters but now I get to actually “Eat” some because there is less damage to the meat, sell some with less damage to the pelts and save my shoulder a whole lot of hurt! 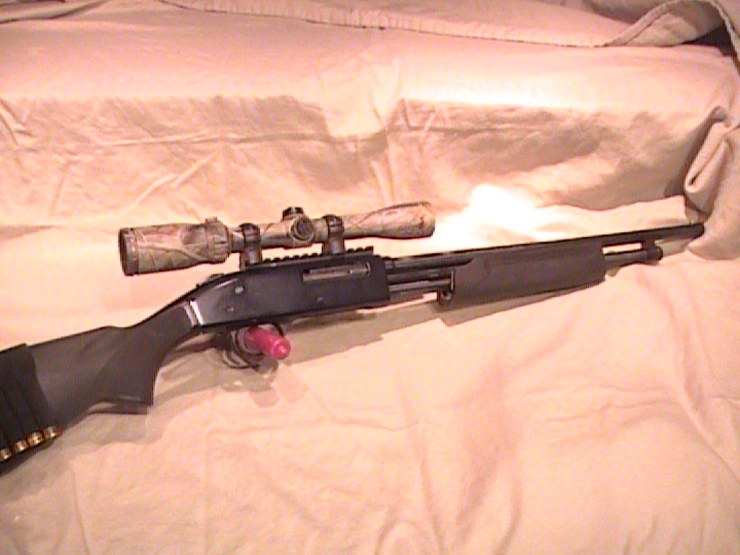 This is my present Mossberg combo. A Mossberg 5oo Bantam with picatinny rail and 2-7 scope. The scope has a 30-30 reticle with a circle. This is a great combo for 75 yard shots. With my 210 grain slugs over 12 grains of 2400 it makes for a deadly accurate combo. 3″ groups are common. I typically try to keep the rounds centered on a 6″ paper plate. If all five hit – the load is a keeper.